The Llano Estacado lays on the earth like an overturned platter two hundred miles long and a hundred and fifty miles wide.  With no rivers, ponds or even patches of damp earth, it is one of the most inhospitable places in the country.  The hard dry earth barely keeps alive the short crab grasses that are scattered around, their course stems reaching across the ground like dying tarantulas crawling towards a mirage. Life only exists there because it is unaware that there are better places to be. The plateau would have remained barren of human life except that underneath was the Ogallala Aquifer, a vast, fresh water ocean that, once pumped up to the surface, created the perfect environment to grow cotton, endless sun and infinite water.
Growing cotton was the reason my grandfather loaded up my mother, her three sisters and four brothers into a horse drawn wagon and migrated there from Arkansas around 1915 to became tenant farmers. The four brothers lived there for their entire lives. It was always joyful visiting them. Their houses were scattered across a landscape so flat they could be seen in the distance like peppercorns on a window sill before expanding as we approached to reveal a modest wooden home, a couple of out buildings and a tree or two.  We visited each of my Uncles homes in turn where we were always joyfully greeted like a long lost prodigal family. I was particularly happy to play with my cousins because my family always lived in small towns as we bounced from state to state between the Dakotas and New Mexico, rarely staying in one place for more than a year. They introduced me to chickens and cows, let me pet the horses and play on their tractors. They took me to swim in the deep irrigation ditches running through the patches of cotton like streets through a city. The water was pumped out of the ground with Allison V-12 aircraft engines, the same kind used to power the Lockheed P-38 Lightning fighter plane  during WWII.  The enormous engines sat on the flat land towering above  me like a cathedral with twelve exhaust pipes pointing up at the sky blaring out  a thunderous roar that vibrated the ground and rattled my chest. I bowed to its power.
My grandmother lived in one of those peppercorns on the flat plain that my Uncles called the table rock. It was a gray weathered house, the paint blasted off long ago by sandstorms and, even though it was  the fifties, had no electricity.  We guided our way to her homemade feather beds by kerosene lamp, my young arms so small they wrapped around the glass base like it was barrel, the light flowing along the hallway into the dark rooms like an amoeba. She  wore print dresses hanging down to her ankles with her hair twisted on top of her head like a hat. Let down, it hung to her mid calves. She also chewed tobacco and spit the juice into an empty coffee can. If an AI was asked to make a composite of a pioneer woman it would be her. That house and her seemed like a natural growth sprung out of the Llana Estacato like a small mesa.  Hers was a life stripped down to its essence and the rock of my soul, inhabiting me as I drifted untethered through the world. Her and her fours sons living within miles of each all those years seemed solid as a landmark as the Estacado. It was comforting to me that they stayed so close together and were always there during our sporadic visits through the years.  I remember them coming to visit us while staying with my grandmother in her risen from the earth house. I could see the cars coming from a mile away, a dot moving across the flat land with a fuzzy caterpillar of dust trailing behind. Uncle Custer, Lucian, Pride and Charlies sat in on the dark porch with my father and mother after dinner and talked long into the black sky vailed by the Milky Way. I sat on the floor listening to their laughter like it was music. That is how I remember them, a tight loving family. They have given me an origin story. Every time I step on dry crispy grass that crackles beneath my feet or every time I see a run down old farm house in the middle of nowhere it feels like the comfort of home. I want to live there and let the distant horizon suck the thoughts right out of me.

A drawing of stick figure is the most simplified version of a person as possible, eliminating any need for details like fingers, toes or muscle structure of any kind. Such a minor effort would not seem to be enough to trigger the shape shifting reaction of euphoric joy in me but I was feverishly infected.   The drawings spread across every available piece of paper like a bacterial mold invading the spare spaces in my school notebooks and sometimes in the books themselves in an unrelenting advance.
Over time I became aware that my drawing habit was not normal. With my arm wrapped around the top of my school desk like a rampart and my head held low, I created a hidden space for my pencil to execute the life and multiple deaths of my new creations.  It was like being on heroin. I think I felt the same sense of relief when the pencil hit the page as when the needle punctured the skin.

The flying shoe, as I call it now,  was my own private plane and in that plane I drew a friend. I was very happy that friend was with me. Together we flew over mountains, fields, houses and cars. The sensation of flight felt real and thrilling; but the sensation existed only as long as I was drawing, rapidly moving the pencil to keep the sensation alive. I had to repeat the images over and over again, tucking them into the free spaces until the page was a mess. Once home I continued on any scrap piece of paper around. The concept of a sketchbook did not exist in my world.
Living in a mountain side cave or a boat at sea was so thrilling that even remembering those drawings gives me the same familiar sense of comfort I felt back then.  I liked being alone, distant from the world, adrift and connected at the same time. There is a certain thrill to moving, saying goodby to the recently made friends and moving on to new neighborhoods with new children eager to become the new friends. It was so easy. Basically I just stood still and accepted whoever came up to me.
During those times, when daydreaming seemed real, I used to lull myself asleep by imaging being in a large tent. I was laying on the ground with my head stuck outside where it was icy and cold. Inside the tent however it was warm with  entire village of aunts, uncles and cousins eating by a fire, laughing and hugging each other. It was a wonderfully cozy feeling having them in the warm tent while my head was outside looking at strangers ride by, the hooves of their horses barely missing me. I fell happily to sleep.
​     In every town I lived in the boys loved to have pretend battles. We loved to kill and, also, to die , throwing ourselves into air from the impact of the pretend bullets and tumbling to the ground in imagined death. Imitating real battles make sense because we knew that war was real and we might need to kill. That takes a lot of rehearsing. I tried to recreate those sensations through drawings, repeating the same gestures over and over, exaggerating the pose, digging the pencil into the paper and moving it fast as I can all to enhance the feeling of impact of a bullet or thrust of a sword. The pursuit could last for hours.
There is no different between my drawing of a flying shoe from playing with a toy airplane nor any difference from my tug boat than a dollhouse. My gun fighters/swordsmen/superheroes  are no different than the action figures children to play with. I don't consider those drawings art. I was not concerned about composition and did not show any of those drawings to anyone, in fact I tried to hide them from view.   Only  enough anatomy was learned from comic books to make my figures seem real enough to continue the fantasies as my maturing mind demanded more realism.
My son, when he was thirteen or, more likely, ten, was sitting on the floor holding a GI Joe, twisting it's body as the loose arms flopped side to side. He said, "I am just not feeling it anymore". He seemed puzzled. His mind was moving on.  The drawings were my toys and I played with them far longer than I probably should have. Boys my age had moved on to playing sports or rambling through the neighborhood talking about how Sonny Listen was going to murder Cassius Clay. I was drawing the life I wasn't living. 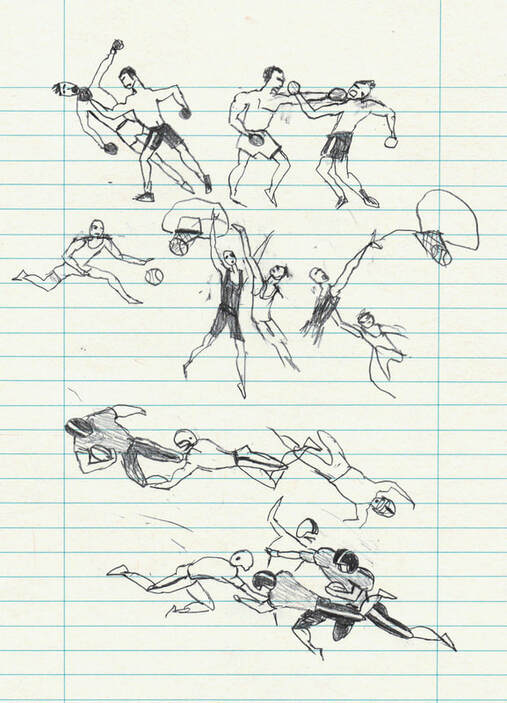