The Battle of the Selves 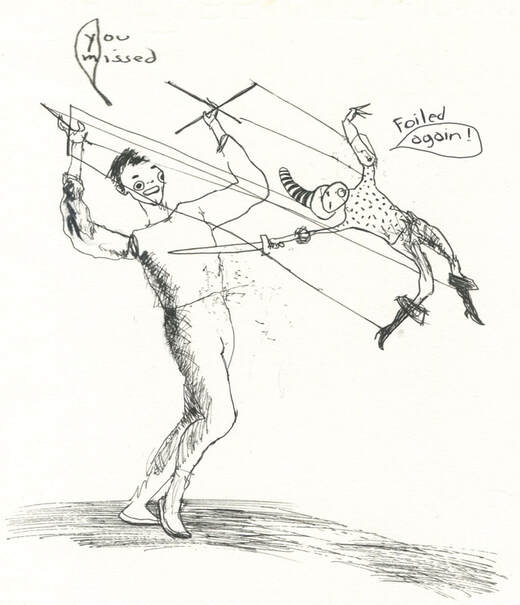 My brother was entering his fifth year at the University of Nebraska when I was admitted. The four hundred miles expanse between Lincoln and Alliance was too far to leave our Mother behind in the store. The store, “Corner Grocery”, was not much bigger than a mobile home.  The exterior was made out of Stucco with a faded whitewash barely covering the grays of the cement. Windowless, except for two in the front and one in the back and located next to an empty lot, it looked more like a large boulder in an open field than a building. The old house behind the store is where I my father and I stayed. If I needed my mother I ran across the yard and took over the store while my mother took care of my dad.
Looking back over the blocks of time that segmented our lives I think the time my mother spent store were the happiest of her life. She was an incredibly shy person, so much so I often wonder if my behavior is more genetic connection than traumatic. In social situations my mother always compressed her body when she talked as if she was a bellow pushing out the words and would always take a half step back as she spoke as if she were about to run for cover as her hand brutalized wad of tissue paper into vapor. Her first sound came out in a twitter, like a tiny bird. With me she never gave raised her voice, told a joke or laughed out loud.
Inside the store, however, she was relaxed and confident.  Instead of being forced out into the world, the world came in to her. She conducted most interactions behind the protection of the long glass counter. There she took money or added up the charges of the items in small ledgers to be paid later, a separate book for each customer  with their name on the top kept in a cardboard box on the shelf behind the counter. All those conversations had a purpose unrelated to her and any casual talk that took place was buttressed by confidence of the importance of her purpose as store owner.  Those years in the store could be judged as her best. It was our home for six years. She cooked our meals on a two burner hotplate. I ate breakfast, lunch and dinner there. Dave even ate lunch there upon occasion sitting at the little table. After school I swept up, stocked she shelves and waited on on the numerous kids invading the store for their afternoon candy. Standing on the platform watching the kids agonize over the rows of choices in the glass counter was a great feeling, however, counting out change to adults was the best. The old pillowy lounge chair was wide enough for me to curl up in and use the arm as a desk to do homework on. After dinner I would go to the house and watch television. My brother went to college the year after my father's death so I had the house to myself. My mother came home around eight thirty. She usually went to bed early. 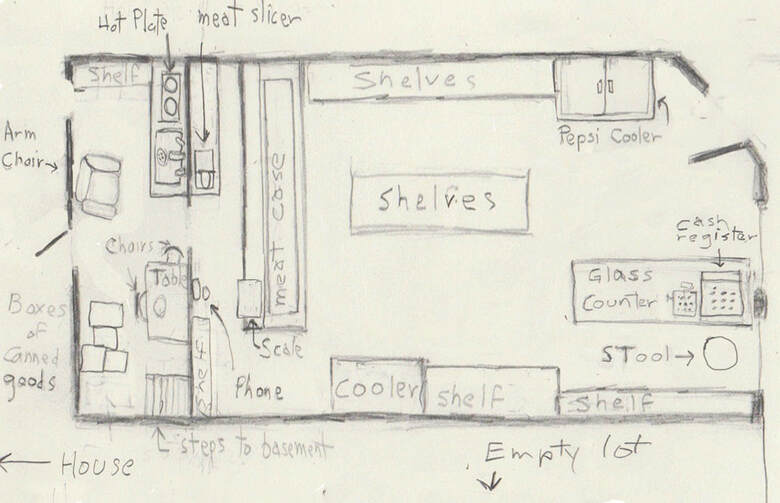 My mother had followed my father a thousand miles away from her brothers and sisters still living close together on the Llana Estacado in New Mexico. The brother and sisters who had rallied around her when she had passed thirty still single and childless and tricked my father into marrying her. Maggie, Ovie's older sister, was outgoing, gregarious and full adventure. She convinced my mother to put an ad in the Lonely Hearts Club of the Denver Post because she was approaching her mid thirties and still not married. My father saw the ad and sent a letter along with his picture.  My mother refused to write back so Maggie secretly sent a letter and included my mother's picture. 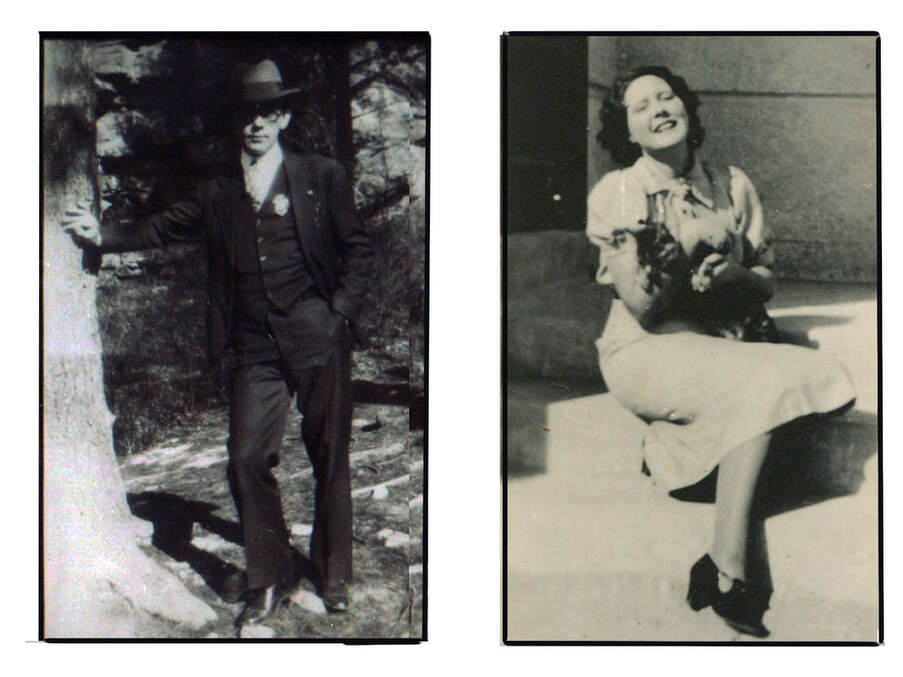 Maggie, pretending to be my mother, corresponded regularly with my father.  She used all her full of fun, cleverskills to develop a persona for my mother that a lonely man could not resist so my father drove the ten hours south from Denver to meet my mother to be. Maggie and the four brothers, Charlie, Custer, Lucian and Pride made sure he got a royal welcome, full of Southern Baptist love. My Uncle Charlie, a bachelor, stuck by my father's side to make sure he was throughly entertained enough not to notice my mother's lack of conversational abilities. It is possible that my father, a single, divorced father with a sixteen year son, married my mother's whole family because he soon moved to Lovington and joined the clan. Uncle Charlie became Dad's best friend and, decades later when humor was possible, told me the story. According to him Dad always wondered why my mother was quiet. 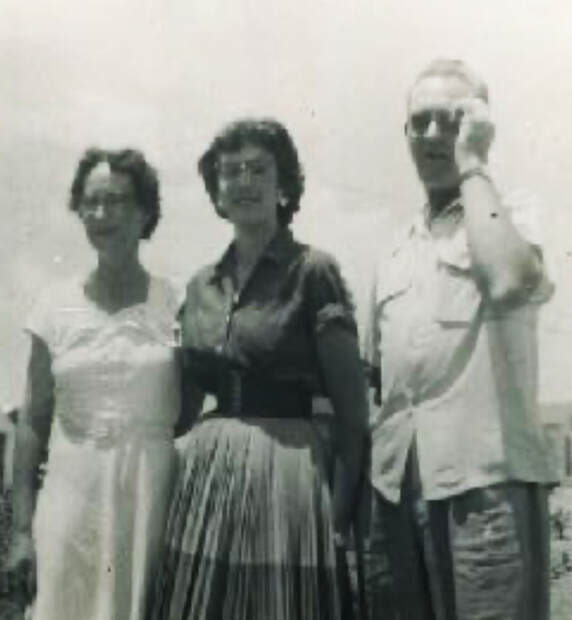 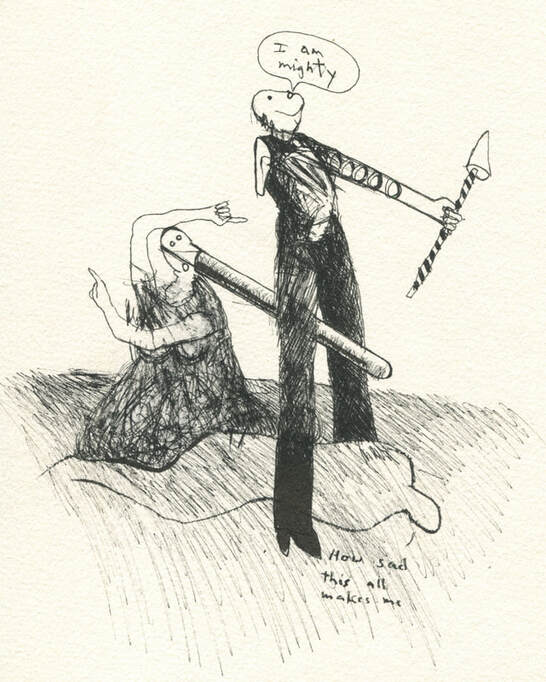