I like to think I am a clever person, someone capable of intellectual, if somewhat obscure, humor. During conversations I had a habit of inserting those obscure thoughts out of context. The comments were not inappropriate but the psychiatrist, who was treating me at the time, thought them unproductive and even admonished me for making such lofty attempts during the conversations with the young women he had arranged for me to meet. "Just make normal conversation," he said. That was when he thought my problems could be solved with a little behavior modification, a little social fine tuning, before he decided that he did not know what was wrong with me. What was needed, he decided was a deep dive into psychoanalysis. 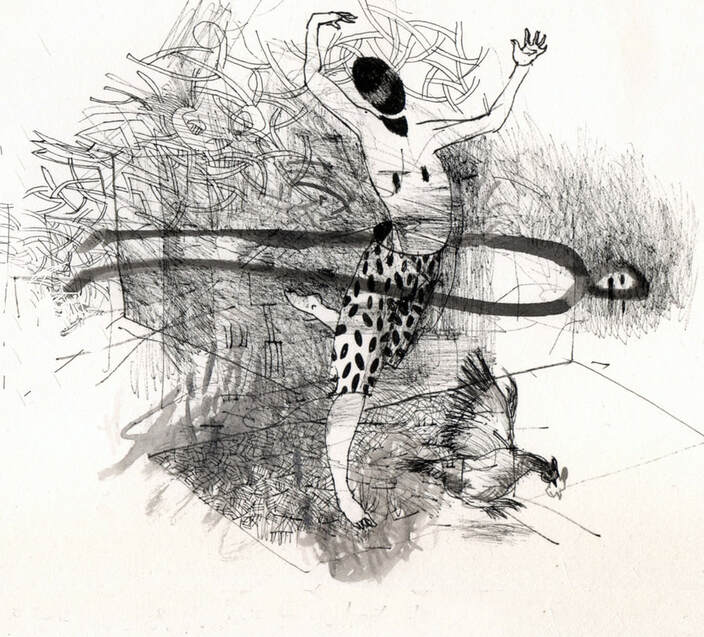 "how will anyone know what tune is being played unless there is a distinction in the notes?" 1Corinthians 14:7 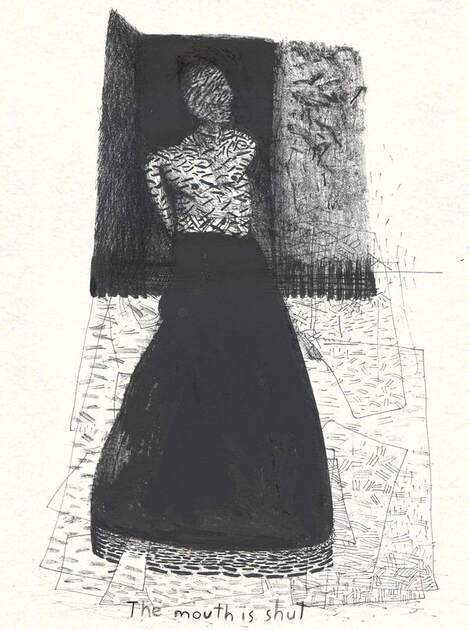 By my early thirties I had become desperate and my life intolerable. So intolerable that I walked through the empty paths of the University of New Mexico at night to the single lit door of the psychiatric center and took a seat in the waiting room to meet the volunteer doctor of the week. I was an immobile shell covering the writhing  brew of adrenaline  and cortisol that was turning my blood to acid and my muscles into razor blades and barbed wire. I needed help. 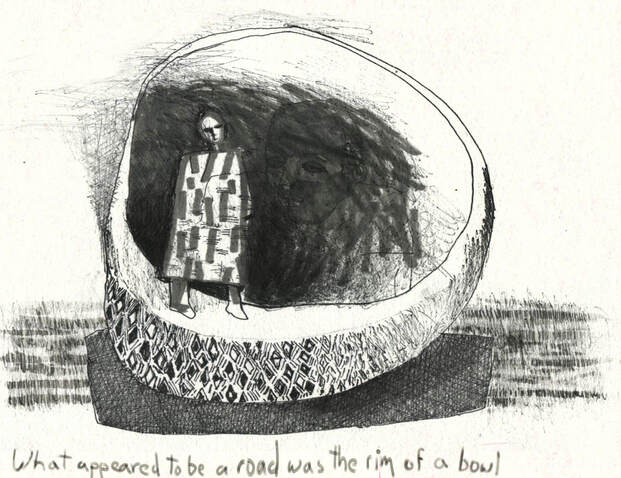 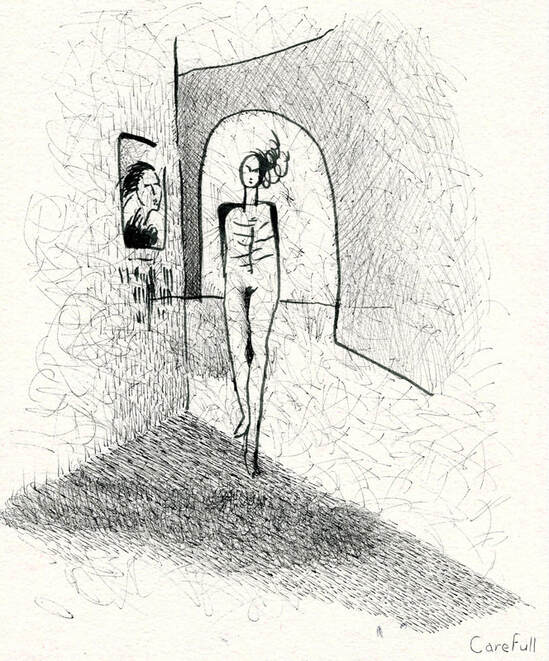 I was in analysis for years in what seemed liked pointless meandering among past memories and current frustrations. He was prescribing valium, which only slightly helped, and compazine for nausea, with equally minor results. We tried different techniques such as vomit therapy, where I gagged myself for ten minutes a day to stop my constant urge to throw up. It was not successful.
I am fighting the urge to get lost in detail, to start peeling the infinite onion and pleading my case that I was a true, but docile, basket case so, instead, I am skipping to the end.
I was in the doctor's office, hair cut short, body skinny from recent weight loss and my voice tuned to a desperate whine while complaining about the pain gripping my chest when he leaned forward and said "You are imitating the death of your father".
I remember looking at him thinking that it was the dumbest, off the wall statement I had ever heard; but at the same time a calm settled over me. I sat in silence inventorying my body and wondering where the pain went. Somehow, with that statement, tumblers fell into place, a vault door opened up and I was free from agony. With the speed of a snap of the fingers my life changed and all I could do was sit in his office and shake my head in wonder.
It had made sense that I should have behaved so dramatically over the death of my father considering the circumstances. When I was twelve I oddly became my father's caregiver, staying with him alone in the house all day for months watching him slowly wither away. Circumstances, that right now, I don't have the skill or the will to describe. Circumstances whose long drama finally ended that day. It made sense for my unconscious to do what it thought it had been trained to do, imitate the death of its father.
After few weeks of wondering around Albuquerque waiting for the coils of barbed wire to wrap around me again it became clear the change was permanent. Just to make sure, however, I went north to Nebraska, took acid and stayed overnight on my father's grave to make sure there were no ghosts left over. Nothing underground was stirring so I spent the day bicycling through the old streets marveling how small the town was compared the long journeys I thought I was taking as a child. Afterwards, blessed with a euphoria that made colors purer and the air delicious, I hitchhiked to Iowa City where I met a friend and drove from there to Manhattan ready for a new life. 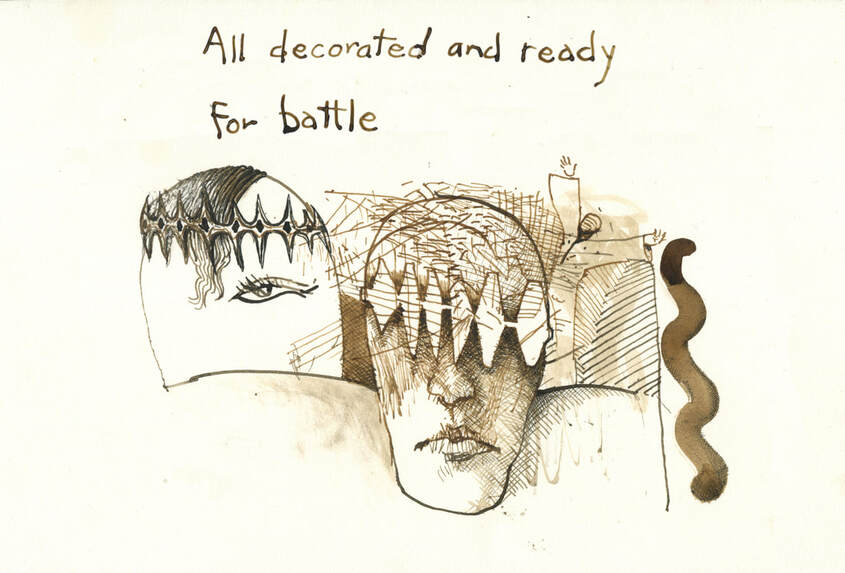 The unconscious mind had been just a curiosity to me back then, having only a skipping stone type of knowledge of Sigmund Freud's method of psychoanalysis that he developed to penetrate the secrets of our unknown selves. I had no idea  the power the unconscious had to twist my body into ropes, shrink my heart, reroute the signals in my brain and flatten me to the floor where I stayed still as possible; beyond the reach of alcohol, marijuana, cocaine, LSD, valium or meth, avoiding all human contact until the storm had past and my breathing regulated enough to brave social interaction again.
Likewise, it seemed just as impossible that a single sentence could make it all disappear in a flash ending a two decade nightmare.  As  if the unconscious is a secret force that can only be identified by its shadow. 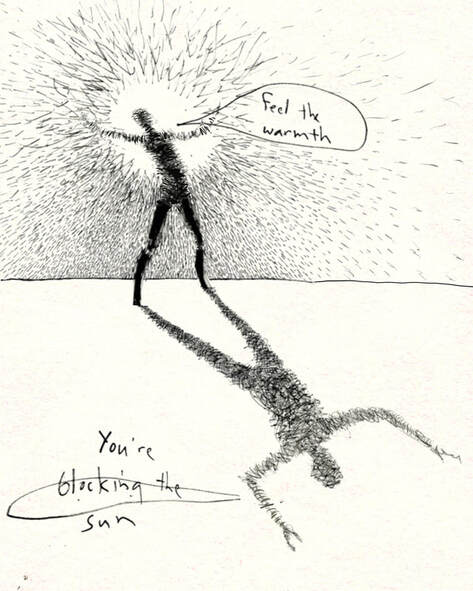 Years after leaving Albuquerque I called the Doctor to let him know that a book of mine was being published, to talk about that special day and thank him once again for saving my life. He said I was lucky, classic psychoanalysis is not used anymore. It takes too much time and too much work to dig for repressed memories.  Now they give out antidepressants and enough advice to keep the patients functioning in the present. 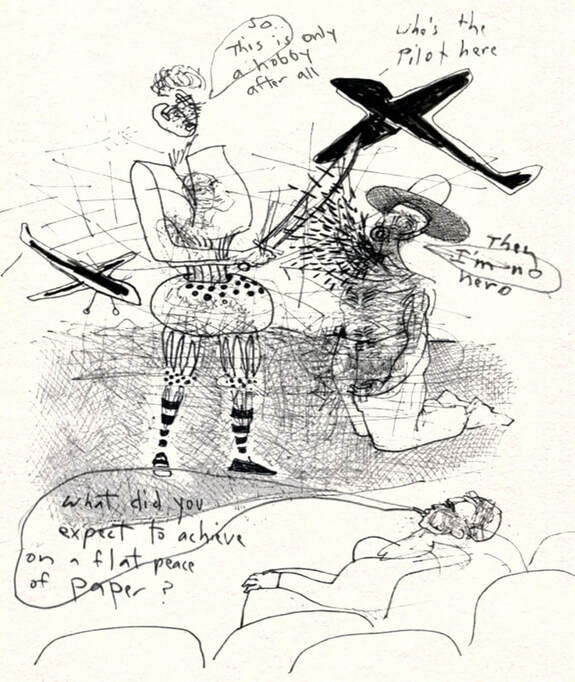 Years before my twisted unconscious mind was freed by a single sentence, another part of my secret self appeared with equally dramatic suddenness and electrified me with joy. I was in first grade following my teachers instructions to create a story with drawings. Even before being half way finished with the drawing, I was flooded with an extreme euphoria,  the mother load, a full needle of endorphins straight into my veins. 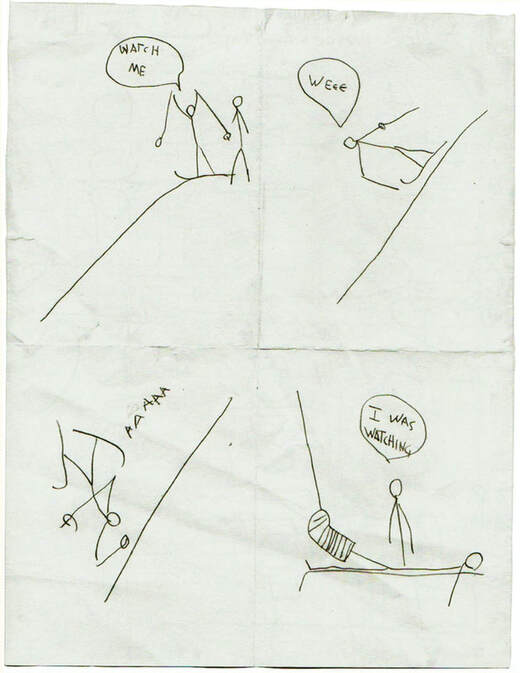 I became obsessed with drawing from that moment on, covering every scrap of paper around the house and spare space in my school notebooks with figures.  Like a brew from a witches cauldron all the kinds of sensations could be conjured up for me just by drawing those little figures.  It was a self contained ritual performed to make myself feel joy, a joy I felt only while moving the pencil.
The mystery to me is that such joy should have been given to me. Not just any joy that was commonly experienced by my young brain but an extreme, almost unnatural joy hitting me like a bolt of lightening for no reason. Plus, birthed from the same unconscious mind was the secret command for my body to die. A force that disappeared with same suddenness as the other had appeared. Both are still lurking in there. I court the joy and try to avoid the despair.